My son was wandering around with this book the other day. He’s 7, so he’s about the same age I was when it was given to me. I’ve told him the story before of how I got it, and his eyes went round as saucers. Even though I tried to tell a simplified, matter-of-fact version, he got quite agitated and upset. I tried to reassure him – but I guess it upset and agitated ME at that age, so maybe that’s just normal.

I had just started the first year of what they called ‘junior school’ (the British equivalent I think is Year 3, or Year 2 in Australia). I was 7, by the very skin of my teeth, the youngest in the yea

r. I was also hugely excited. I had a canvas satchel of my very own, an extensive collection of pencils in various stages of sharpness, a yellow eraser in the shape of a die, and a pen whose top you could twist to tell various times tables. I also had a red Silvine exercise book, ruled with pale blue lines, with conversion charts on the back and a rhyme to help you remember days of the month (30 days hath September…). I was super-keen and totally ready to go. I was a 7-year-old kid, with bunches and sensible shoes, and the usual interests and woes.

Then I started in Mrs B’s class. She was a sixty-something, sturdy, grandma-ish old lady, with white permed hair and spectacles. And actually she WAS the grandma of a girl in my class (yes, conflict of interest). This girl, Mrs B’s grand-daughter, was all Alice bands and long blonde hair, Mary Jane shoes and the sharpest pencils you ever saw. I can’t remember anything else about her – I think she was nice enough to talk to though.

The perfect grand-daughter and I sat across the aisle from one another. On the first day we had to draw margins in our brand new exercise books – something I had never done before. I kind of stuck my fingers a bit over the edge of the ruler, so my first ever margin came out like this:

The perfect grand-daughter’s margin was…perfect. It was held up for approbation. Mine was held up for the kids to laugh at. And they did laugh, uncomfortably, probably glad not to be on the receiving end and hastily rubbing out mistakes with their die erasers.

After that it was lots of little things. Never getting picked but always getting picked on, every a wobbly line, every wrong answer. Never getting praised or encouraged but watching another person (guess who) get picked over and over as the best example, the group leader, the answerer of questions. Every single day feeling stupid and vaguely anxious about what I might do wrong this time.

I wasn’t a troublemaker – far from it. I have some ideas but I can’t know for sure why she should dislike me so much. However, her dislike was real and palpable. Other students knew about it and felt sorry for me. I remember this as a really unhappy time, though I never told anyone about it. Maybe I didn’t think anything could be done. But this is the incident that stays most in my mind:

I had a little flask in my bag for my over-diluted orange juice. It was something like the picture on the left, but mine was an ugly off-green thing, possibly with some Sesame Street scene stuck to the front. The flask had a screw-on white plastic cap, and a white plastic cup that fitted over that as a lid. The cap wasn’t screwing on properly. I’d noticed it earlier and done my best to screw it on tightly. Obviously I hadn’t done it well enough.

My flask was in my school bag, and everyone’s school bag was at the front of the classroom, all in a heap, ready for home-time. The teacher started to hand the bags out – and it became clear that there was a leakage somewhere. There was little puddle, slowly spreading down the uneven classroom floor to the back of the room. Some bags had got wet.

The teacher was furious. She rifled through the bags till she found the guilty party.

“WHOSE BAG IS THIS?”

I was terrified. The other kids knew it was mine of course and were turning to me with wide eyes, waiting to see what would happen.

“COME TO THE FRONT!”

I was so scared of her that I actually had an out of the body experience – that’s how I remember it. A little girl with a bunches walking slowly to the front, everyone staring. You could have heard a pin drop. 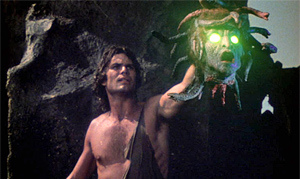 She actually spun me round to face the class, holding the dripping bag aloft like Perseus with the head of Medusa.

Back in my body again, I just covered my face with my hands. I couldn’t bear everyone looking at me. She tried to prise my hands off; I wouldn’t. Then the bell rang for the end of the day. Students came up and took their bags – eyes covered, I felt them moving around me, trying not to touch me. When they were all gone, she made me get paper towels and try to blot up the mess on the floor. Then I took my guilty bag and terrible self and fled.

I don’t know what would have happened if she had stayed as my teacher for much longer – but miraculously, when the next term started Mrs B wasn’t there, and neither was her perfect grand-daughter. In her place came a young woman with long brown hair, a shapeless hippy dress and a guitar. I just thought she was wonderful. She was so kind, so interested, so fun – I’d never had a teacher like that before. I felt like a dark cloud had lifted and I was back to being a normal kid again.

We all did a project on something or other that term – something that wasn’t about just neat margins and correct addition. Mine was on wild animals. I remember telling her how funny it was that a mandril was not only an animal but also a kind of ship’s captain, and her trying to break it to me that I was getting my mandrils and my admirals mixed up. Anyway, I got a prize for that project. It was the Ladybird Seaside Notebook and in the back it had this message in green felt-tip pen:

So the book that my little 7-year-old is wandering around with means a lot to me. It represents how I learned about the importance of kindness, patience, interest and fairness in a teacher.

Look. I don’t expect teachers to feel the same about every student. It’s inevitable that as human beings we have (sometimes instinctive) likes and dislikes for particular people – but as professionals, how we feel and what we present is different. We cannot play favourites and we must not use the inherent power imbalance in the teacher-student equation to intimidate, demean or self-aggrandise. It’s not crazy to say that anyone in a ‘caring’ profession, and that includes doctors, nurses, childcare workers and aged care professionals, needs to fundamentally like people and believe they are worth it. Anyone who doesn’t or who is picking and choosing who is worthy of help or not, is doing a disservice to themselves and to the people they are supposed to be helping. There are other jobs out there you know.

But maybe I just feel strongly about this because of my experience. What do you think? *Is* teaching a caring profession? Have you had any experiences that can shed more light on the issue of teacher-student relationships?